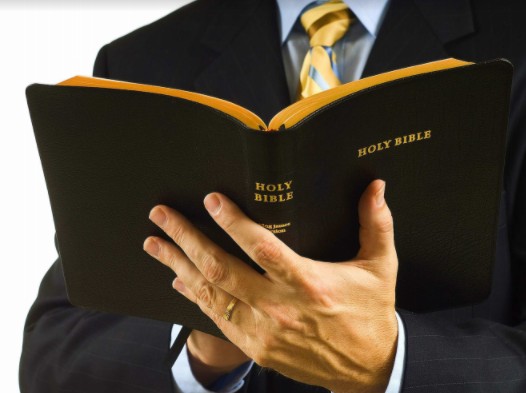 FOREVER IS A LONG, LONG TIME

Although the Bible is seldom opened today, it still is the world's greatest resource: the living word of God. And because Jesus Christ is the WORD of God, made flesh, he is the power of God and the wisdom of God. And therefore, we must heed what he commanded King Solomon to do so many centuries ago.

"My son, ATTEND to my WORDS; incline thine ear unto MY SAYINGS. 21Let them not depart from thine eyes; keep them in the midst of thine heart. 22For they are LIFE unto those that find them, and HEALTH to all their FLESH.” Proverbs 4:20-22

To fulfill his plan to save mankind from his sins, God sent his "word," Jesus Christ, to be the doorway into his eternal Kingdom.

"In the beginning was the WORD [Jesus in his spiritual body], and the Word was with God, and the Word was God. 2The same was in the beginning with God. 3All things were made by him; and without him was not any thing made that was made. 4In him was LIFE; and the LIFE was the light of men. 5And the light shineth in darkness; and the darkness comprehended it not. 14And the Word [Jesus] was made flesh, and dwelt among us, (and we beheld his glory, the glory as of the only begotten of the Father,) full of grace and TRUTH." John 1:1-5 and 14

"Verily, verily, I say unto you, He that BELIEVETH on me hath EVERLASTING LIFE." John 6:47

How precious then is the written Word of God. The Bible has been given to us as our Manual for Life: both in this life, and in the one to come. In fact, God's word will be our foundation throughout all eternity.

"Heaven and earth shall pass away: but my WORDS shall not pass away.” Mark 13:31

Why did Jesus teach in parables?

When Jesus walked the earth, he spoke in parables to all who heard him.

"And with many such parables spake he [Jesus] the word unto them, as they were able to hear it. 34But without a parable spake he not unto them: and when they were ALONE, he expounded all things to his disciples." Mark 4:33-34

One day, Jesus told his disciples why he taught in parables.

The "good" figs and the "bad" figs

Long ago, God showed the prophet Jeremiah two baskets of figs; one basket contained "good" figs and the other "evil" figs. And in Jeremiah chapter 24, the Lord says that there are two types of Jews, those who are whole-hearted followers of the Lord (the good figs), and those rebellious Jews who reject God (the evil figs). Likewise, when Jesus came to earth, most Jews rejected Him and remained dead in their works and legalism. Today, most Jews are the evil figs, whilst a few of them, the "born-again" Jewish Christians, are the good figs. And God also told Jeremiah that one day, he would destroy the nation of Israel and scatter them all over the world. And then, many centuries later, he would gather his dispersed nation and bring them back to the Promised Land.

In the book of Mark we read of a very interesting incident. Here we see Jesus cursing a fig tree; but why did he do it? It was to be a sign for the future. One day, Jesus will triumphantly return to earth, to destroy this evil world and resurrect the saints. And this is how we will know when it will be.

"And Jesus entered into Jerusalem, and into the temple: and when he had looked round about upon all things, and now the eventide was come, he went out unto Bethany with the twelve. 12And on the morrow, when they were come from Bethany, he was hungry: 13And seeing a FIG TREE afar off having leaves, he came, if haply he might find any thing thereon: and when he came to it, he found nothing but leaves; for the time of FIGS was not yet. 14And Jesus answered and said unto it, No man eat FRUIT of thee hereafter FOR EVER. And his disciples heard it." Mark 11:11-14

"And in the morning, as they passed by, they saw the fig tree dried up from the roots. 21And Peter calling to remembrance saith unto him, Master, behold, the fig tree which thou cursedst is withered away. 22And Jesus answering saith unto them, Have faith in God." Mark 11:20-22

The nation of Israel is reborn

In addition, Isaiah the prophet not only spoke of the supernatural birth of Jesus Christ, the Son of God, but he also predicted the rebirth of the nation of Israel. Jesus prophesied that when the "fig tree," the state of Israel, was "reborn," it would preempt his return to earth.

"A voice of noise from the city, a voice from the temple, a voice of the LORD that rendereth recompense to his enemies. 7Before she travailed, she brought forth; before her pain came, she was delivered of a man child. 8Who hath heard such a thing? who hath seen such things? Shall the EARTH be made to bring forth in ONE DAY? or shall a NATION BE BORN AT ONCE? for as soon as Zion travailed, she brought forth her children." Isaiah 66:6-8

Christ's generation rejected God's only begotten Son. And some 40 years after the chief priests, scribes, Pharisees, elders, and the leaders of the Jewish people demanded Pontius Pilate crucify him, God's judgment fell upon Israel. Titus the commander of the Roman army, invaded Israel, conquered the promised land, and burnt the city of Jerusalem to the ground. The Jewish people were scattered among the Gentiles for almost 2,000 years, and their land was occupied by other nations.

However, on the 14 May 1948, the United Nations declared Israel to be a national home for the Jews: and the State of Israel was "born in ONE DAY," thus fulfilling Isaiah's prophecy to the letter. From that day, Jews from all over the world began streaming back to Israel by the thousands.

Jesus further explains the parable of the fig tree

Throughout the Bible, God refers to Israel as the "fig tree." But in Matthew 24, Jesus gave his disciples the countdown of events that would precede the end of the world, his return and the resurrection of his "elected" saints. In that passage, he acknowledged that the nation of Israel, the "fig tree," being reborn, would be a major sign of the approaching end of the age.

"Now learn a parable of the FIG TREE; When his branch is yet tender, and putteth forth leaves, ye know that summer is nigh: 33So likewise ye, when ye shall see all these things, know that it is near, even at the doors. 34Verily I say unto you, This generation shall not pass, till ALL these things be FULFILLED.” Matthew 24:32-34

It has now been more than 70 years since the State of Israel was reborn, in 1948, and the return of Jesus is getting nearer by the hour. Therefore, more than ever before, Christians should be reading their Bibles diligently, particularly Matthew 24, Mark 13 and Luke 21. In these three chapters, the Lord meticulously details the events that will preempt his return. We need to know them, and we need to share them with everyone the Lord leads us to speak to. And we also need to be ready, because no one knows the day nor the hour of Christ's return.

"WATCH ye therefore, and pray always, that ye may be accounted worthy to ESCAPE all these things that shall come to pass, and to stand before the Son of man." Luke 21:36

The countdown to Christ's return begins

In addition, Daniel chapter 12 gives us a better idea of where we are on God's time clock, and when to expect the Lord's second coming. Daniel says "there shall be a time of TROUBLE, such as never was since there was a nation." And we're living in the very time that the end of days prophecy is about to commence.

"And at that time shall Michael stand up, the great prince which standeth for the children of thy people: and there shall be a TIME OF TROUBLE, such as never was since there was a nation even to that same time: and at that time thy people shall be delivered, every one that shall be found written in the BOOK [the Lamb's Book of LIFE]. 2And many of them that sleep in the dust of the earth shall awake, some to everlasting life, and some to shame and everlasting contempt. 3And they that be wise shall shine as the brightness of the firmament; and they that turn many to righteousness as the stars for ever and ever." Daniel 12:1-3

Daniel's end of days prophecy is about to be fulfilled

It seems that the return of the Lord will center around the construction of the third Jewish temple in Jerusalem, in which, the priests will recommence their animal sacrifices and the Antichrist will confirm a covenant with many.

"And he [Antichrist] shall confirm the covenant with many for one week [seven years]: and in the midst of the week he shall cause the SACRIFICE and the OBLATION to CEASE, and for the overspreading of abominations he shall make it desolate, even until the consummation, and that determined shall be poured upon the desolate." Daniel 9:24-27

"And from the time that the daily sacrifice shall be taken away, and the abomination that maketh desolate set up, there shall be a thousand two hundred and ninety days. 12Blessed is he that waiteth, and cometh to the thousand three hundred and five and thirty days. 13But go thou thy way till the END be: for thou shalt rest, and stand in thy lot at the END OF THE DAYS." Daniel 11:11-13

During that 1,335 days period, God's two witnesses will stand up in Jerusalem and prophesy for 1,260 days and bring the plagues of God upon the world.

"These have power to shut heaven, that it rain not in the days of their prophecy: and have power over waters to turn them to blood, and to smite the earth with all plagues, as often as they will. 7And when they shall have finished their testimony, the beast that ascendeth out of the bottomless pit shall make war against them, and shall overcome them, and kill them." Revelation 11:6-7

But, three-and-a-half days later, the two witnesses will be resurrected and taken up into heaven (Revelation 11:3-13)

The end of all things is approaching

The generation that rejected Jesus, and crucified their Messiah, is alive and well on the earth today. In the 21st century, the vast majority of humanity will have nothing to with God's only Begotten son. They only use the name Jesus Christ to curse and swear. However, brethren, the "everlasting life" Christ promised his faithful "elect," is now not many years away. And when Jesus returns, to commence his 1,000-year reign on earth, FOREVER will begin for his saints: and FOREVER is a long, long time. If today, you're NOT saved—having never been "born-again"—now is the time to get right with God. Your everlasting Father is waiting to see you repent and be baptized by immersion, for the remission of your sins, and he will fill you with his Holy Ghost and fire. The promise of life eternal is yours to receive, and the choice is yours.

"He that BELIEVETH and is BAPTIZED shall be SAVED; but he that believeth not shall be damned [condemned by God to suffer eternal punishment in hell].” Mark 16:16